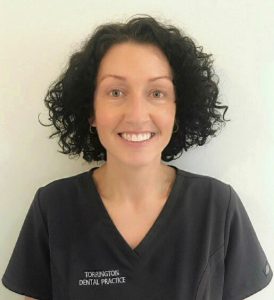 Sabina trained and qualified as a dental nurse in Kent before going on to study at the Eastman Dental Hospital in London where she qualified in 1993 as a Dental Hygienist and received the DENTSPLY Award for Clinical Excellence.

Sabina joined the team at Torrington Dental Practice in 1999 after moving to Devon with her husband. She is resolute in improving the oral health of her patients and the wider community, treating everyone as an individual, with a tailored treatment plan following the latest guidance from The British Society of Periodontology.

Sabina is an active member of the British Society of Dental Hygienists and Therapists, for which she is regional group representative for the South West Peninsula. In 2015 she completed the British Dental Association Radiography course for which she was awarded a distinction.

Outside of dentistry Sabina has adopted a plant based and holistic lifestyle and enjoys being outside in the open spaces of Exmoor and Dartmoor, whatever the weather brings.