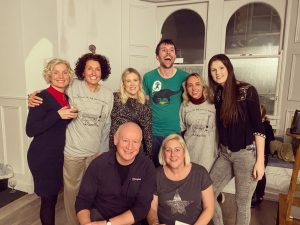 What may be the first ever hip-hop concert in a dental surgery took place on Friday November 19th, when Exeter-based Samantics performed live at Torrington Dental Practice, raising £320 in support of MIND, the mental health charity.

Dubbed ‘The poet of our time,’ Samantics blends spoken word, multiple instruments, and a loop station to deliver his unique and powerful sound which speaks of his own very personal experiences with mental health.

As an early adopter of the ‘Mental Health Wellness in Dentistry’ framework, TDP is taking a lead in supporting the mental health of its entire dental team. The idea for the fundraiser came to Torrington Dental Practice partner, Ian Mills, when he saw Sam perform at the Roundhouse in London in September.

“I was blown away by Sam’s fresh and thought-provoking sound and asked him if he would be interested in performing at the practice to raise awareness of dental mental health” Ian explained. “The evening was conceived not only as a fundraiser, but as a thank you to our team for their hard work and commitment through what has been a difficult 20 months for us all. Sam’s songs are heartfelt but also very funny and well observed, so there is plenty to laugh along to, as well as think about.”

Some fifty members of the TDP team, their friends and family attended the live performance in TDP’s reception. They were joined on Zoom by Fiona Ellwood BEM, President of the Society of British Dental Nurses, and Roz McMullan, Past President of the British Dental Association, who are leading the Mental Health Framework initiative on behalf of the Dental Professional Alliance. They thanked Ian and his team for all the hard work they have put in to help promote the cause of mental health wellness in dentistry.

Sam has been performing as Samantics for the past seven years. “I’ve been a fan of poetry and writing lyrics since childhood” he explained. “When I began to suffer from anxiety and depression as a young adult, I found that putting my poems to music helped me to talk about my feelings without the worry that I was burdening anyone with it. The response I received when I put my first song out was amazing. It was heart-warming to learn that people cared, but also that I was helping others who were going through the same thing.”

A teacher by profession, Sam gigs at weekends, preferring to keep his music as a hobby. “I don’t want to put pressure on this thing I love so much” he explained. During the week he delivers lyric writing workshops for disadvantaged teenagers and young adults, some of whom are in a secure unit.

Sam is unusual in speaking so openly about feelings that so many keep hidden. Even before the pandemic, dentistry was associated with high rates of stress, burnout and mental health issues, and COVID-19 has exacerbated the situation. As Mental Health Wellness Lead at TDP, Dental Hygienist Sabina Camber encourages the team to talk about mental health wellness, and to feel comfortable doing so, ending any feelings of stigma.

“I aim to provide a safe space to talk at TDP, allowing the team to feel valued and, in turn, to thrive” she said. “I was transfixed by Sam’s performance on Friday. It was a privilege to watch, and a fantastic opportunity to bring us all together for a social evening in support of a cause we all feel strongly about.”

During her address to the team on Friday evening, Fiona Ellwood recognised TDP’s contribution to the development and promotion of mental health wellness in dentistry saying: “In 2019 the mental health framework for dentistry was only a dream  ̶  a vision to promote mental health wellness not only for dentists but for the whole team. If anybody was going to help us get there it was Ian and the team at Torrington Dental Practice. Ros and I worked hard to ensure everybody’s voice was heard within the framework and we have been really delighted with the buy in from the practice, and your contributions to our wider research which is now being recognised internationally.”

The fundraising evening was held in line with COVID-secure guidelines for small gatherings, and the number of attendees was restricted due to the current increased case rates in Torridge.

Pictured: Samantics (top row, third from right) with some of his fans from TDP, including practice partner Ian Mills, (bottom row, left).